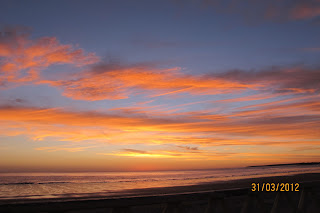 As designers, we are inspired by many things. Culture, history, art, architecture, nature.....almost anything could be the source of inspiration.


The colours of a peacock's feathers, the shape of a building or an architectural detail, the shape of flower, the patterns in nature....leaves, the way the wind makes waves in the desert sand.....a painting, the colours of a landscape; these are all sources of inspiration for us. So we are always collecting pictures and objects for our scrapbooks and scrapboxes.

I woke up early one morning and saw the sun rising over the ocean in Puerto Madryn on the Valdes Peninsula. The colours of the sunrise were so amazing, I took a photo as inspiration for a colour palette for my scrapbook.

Using photoshop, I have recreated the colours of the sunrise onto a colour chart which I call "Patagonian Sunrise". 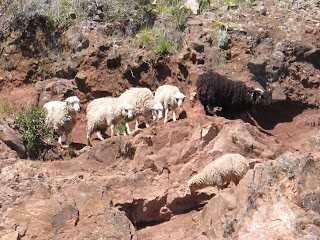 Photo 1: Sheep making their way down the side of a hill
Peru – Lake Titicaca
Apr 2012

While observing this group of sheep trying to make their way down a hill, I realised that sometimes people really ARE like sheep, but are you a leader, a follower or a Black Sheep?

Members of a group like other members to conform to the rules of the group and those who don’t follow the spoken/unspoken rules are called “Black Sheep” usually in a derisive manner.

Photo 1 : The group walks down the side of a steep hill. The leader is ahead of the others, followed by the black sheep and by a group of four other sheep keeping close to each other.

That’s just like humans…..there’s a leader and there are the followers. The followers tend to huddle together for comfort. Then, there’s that individualistic member of the group: the Black Sheep. 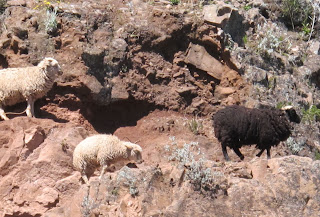 Photo 2: the leader reaches a difficult bit, tests his footing on the next level down and drags himself back up.

“Too steep, guys, it’s too dangerous to continue.” he seems to be saying, “Let’s go back.” 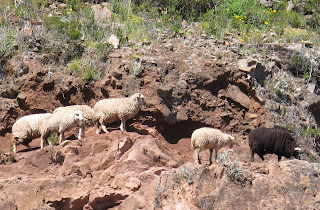 Photo 3: A bit of a disagreement
Peru –Lake Titicaca
Apr 2012

“You got to be kidding me. We’ve come so far already. Besides, that nice grass down there is worth the risk.” says the Black Sheep.

“No, we are NOT going forward. Turn back!” says the leader, blocking the Black Sheep.

“Hey, get out of my way.” says the Black Sheep, butting the leader in the head.

“I’m in charge, and I say we go BACK.” says the leader, butting the Black Sheep back. 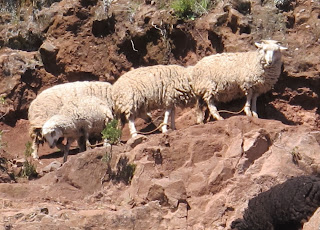 Photo 4: Just like in a human group......plenty of observers.
Plenty of comments. But no one wants to get involved.
Peru – Lake Titicaca
Apr 2012

Sheep 1:  “Why are we stopping? What’s going on down there?”

Sheep 2: “Whatever it is, let’s stay right out of it. Don’t look, keep your head down.”

Sheep 4, turning back: “I think I’ll just go back like the leader says.” 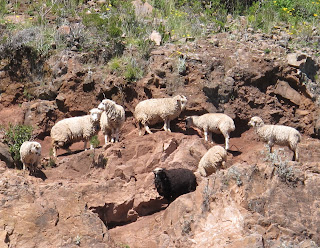 Photo 5: By now, the little confrontation has drawn a bit of a crowd.

“Oh, if he wants to kill himself, let him.” someone bleats.

After a few more rounds of head-butting, the leader relents and lets the Black Sheep through.

“Oh, GO if you want to. Don’t blame us if you break a leg and have to be turned into lamb stew. Come on guys, let’s go and leave him to his fate.”

But I’m happy to report that the Black Sheep found a new path down and arrived safely. The rest then followed and the last I saw them, they were all happily munching on the grass.

. Dialogue is what I imagine they must be saying in sheep language. 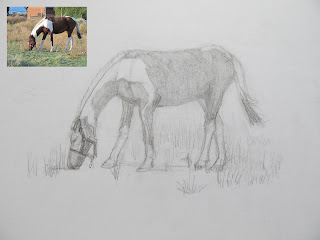 This is my second attempt at drawing an animal. I took the photo of this horse grazing in a field on the outskirts of El Calafate, a picturesque little mountain town in Argentina.

My first attempt at drawing an animal was really a non-starter.....the subject in question refused to co-operate.....drooled on my drawing pad and jumped at my camera when I tried to take a photo. I am, of course, talking about Millie, the super-hyper-jumpy dog who thinks she's boss in my parent's house. 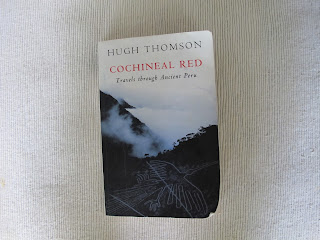 Anyone can find a ruin in the jungle, but it can take a lifetime to understand what you have found

~ John Hemming, in the book Cochineal Red by Hugh Thompson ~

I wished I had read this book before I went to Peru.  My experience would have been all the richer for the understanding I have gained about Peru’s history and cultures. Now that I see Peru with new eyes, I want to return even more than ever.

I expected a memoir by an archeologist to be dry and academic, but Cochineal Red is far from being dull…..on the contrary, it is a very enjoyable and interesting account of Hugh Thomson’s travels in Peru to find Llactapata and his quest to understand the Inca and pre-Columbian cultures, a quest spanning more than a quarter of a century, and which took him on many journeys throughout Peru.


Most tourists have heard of Machu Picchu, the famous landmark in Peru. But directly opposite Machu Picchu, across the valley, stands Llactapata, a lesser known site, but to the Incas it is probably a more important site than Machu Picchu.

The first chapters describes how Hugh Thompson and his team found Llactapata after a failed attempt some years back. Later chapters takes us to Caral, the pyramids of the Moche, the Nasca Lines, the Temple of the Sun on Lake Titicaca and a pilgrimage on foot to the glaciers far above the Sinakara Valley where the Qoyllurit’i festival…..with representatives from tribes all over Peru, from the mountains to the amazon jungle….reaches its climax and the crucifix known as El Senor de Tayankani, or Lord of Qoyllurit’i, is returned to its shrine high across the mountains
.
The book ends with a return to Llactapata and the realization of the importance of astronomy to the Inca’s, in particular the group of stars known to us as the “Seven Sisters”, by which the Inca’s could foretell four months in advance what the weather was going to be like, and whether it was going to be a good harvest that year. 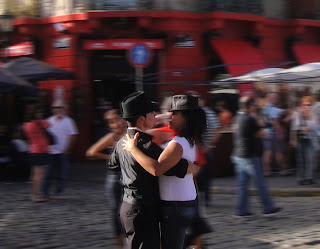 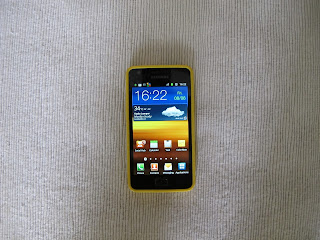 After much umm’ing, ha’ing and being a general pest at the Samsung dealers and Apple store, I bought an Android phone…..the Samsung Galaxy SII.

Yes, I know the latest is the Galaxy SIII which is a viable competitor to the i-phone, and I have to say I love the sleekness of the new slim design. But I’m not going to need the improved features like the 4inch 720pixel screen, lightweight casing, quadcore engine and enhanced voice features.

I use my phone as a, well, phone most of the time and also an alarm clock. The calendar and reminder function is handy; and when I’m on the move, it’s nice to be able to pick up emails and  listen to music. Everything else is a nice to have.

Because of the SIII release, the price of the SII has dropped and being someone who’s always on the lookout for a bargain, I decided the SII already has everything I want, so why pay more?

Besides, I have learnt my lesson with handphones, computers, camera’s and other bits of technology and gadgets…..there will something newer and better next year. So I have stopped chasing the latest thing and just focus on what’s tried and tested and what I need.

After playing around with the phone for a couple of weeks, I have to say I am very happy with the  Galaxy SII and have downloaded some useful utilities…all free….. from the Google Play Store….a calendar, notes and task list, an alarm clock, calculator, music player, mini photo editor, camscan which allows you to convert a photo of a document to a PDF file, and something called Super Swiss which is just like a virtual swiss knife….this turns the phone into a torchlight, magnifying glass, a compass, a bubble level, a plumb line and a compass. Very cool!

Email ThisBlogThis!Share to TwitterShare to FacebookShare to Pinterest
Labels: 101 things to do in 1001 days, Things Done 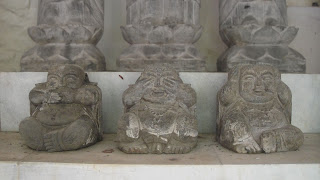 But it was so tough to do!

Some people are naturally detailed-oriented and must leave no stone unturned in their quest to provide you with ALL of the information they have collated on a subject. Others are just naturally long-winded and ramble on.

Then there are the ones who talk like a runaway train…..leaving no gap for you to respond. And when you do finally manage to squeeze in a few words, when they pause for oxygen, they immediately interrupt and increase speed.

The slow talkers are just the opposite. They are in no hurry……they are on the slow train to Shanghai, and a paragraph takes just as long to get there. The meditators must cogitate on every word before it is spoken, leaving you sitting on the edge of your chair, wondering if the sentence will ever be completed.

And of course, the natural urge is to interrupt.

Conversely when you are the one talking, do you ever get the feeling that sometimes the other person is not really listening? Perhaps they are looking all around instead of looking at you, the speaker; or their eyes roll up to one side and you just know they are already thinking of a reply?

Or their fingers are impatiently tapping  “hurry up!” The knee-shake is a variant of this.

Then there are the interrupters. You can never complete a sentence with these fellows. Before you‘ve got to the point, they’re already replying, and, if you are also an interrupter, inevitably you end up having parallel conversations!

Sad to say, I was guilty of most of the conversational crimes above.

So #11 Listen more than talk was tough…..it was tough not interrupting until the other person has finished speaking . And it was tough just listening instead of thinking of a reply when someone is talking. There have been a few lapses. But gradually, I’m getting the hang of being a better listener.

So in listening, we focus 100% on what the other person is saying.

jean
Thanks for dropping by. You've come to Jean's Journal of creative adventures and mis-adventures. I am a mature fashion design student and I have a list of 101 things I want to do in 1001 days. This is where I journal my progress in Fashion Design, Sewing, Dressmaking, Art, Writing, Travelling and Living Mindfully.

My current 101 list is here * on dayzeroproject.com
Note:
* dayzeroproject.com is a website owned by Michael Green.
* the script for the countup and countdown timers are from www.javascriptkit.com and www.hashemian.com respectively.
photo's and postings on this blog are mine, unless otherwise stated.

This work is licensed under a Creative Commons Attribution-NonCommercial-ShareAlike 3.0 Unported License.